Savills and Knight Frank - How their Alpine Property Reports Compare

In recent weeks, both Savills and Knight Frank released their 2016 Alpine Property Reports looking at premium resorts across Europe and North America with the aim to inform prospective buyers about resort performance. With each report touching on slightly different points, we have combined the key points to make sure you have all the information you need when looking to buy your ski home!

Buying a ski property will always come at a premium and both Knight Frank and Savills have reiterated that. With limited housing stock and little space to build new homes, the exclusive nature of owning your own ski home is not set to change anytime soon. French and Swiss resorts continue to dominate the list of high-value resorts, but their growth rate is slowing and it is the Austrian resorts that are showing the best signs of growth due to constant investment in non-skiing related pursuits and creating resorts which attract the younger demographic some of the established resorts struggle to draw. The general buying trend has now moved away from super-luxury resorts like St Moritz to better value resorts such as St Gervais and Chamonix where the price per square metre is significantly cheaper. Dual season resorts offer the best occupancy rates across the year, and major airports such as Lyon and Geneva now have greater passenger numbers in summer than winter. Despite the UK’s decision to leave the EU, both reports have stated that the market hasn’t generally suffered as there is less reliance on British buyers due to a contingent of buyers with new-wealth coming from Asia and the Middle East.

At a Glance: The top 5 resorts by property price per m2 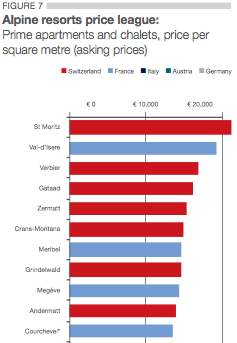